Here’s something interesting I’ve observed in the tech scene over the years – every other entrepreneur I meet will tell me that they used to be an investment banker. But seldom would I run into lawyers-turned-founders.

But Kaodim, a Malaysia-based service marketplace, was founded by not one but two former lawyers. Moreover, Choong Fui-Yu and Jeffri Cheong were at the top of their game in law before they decided to give it all up in the name of entrepreneurship.

Choong was a corporate and commercial litigation lawyer, and claims to have been the “leading profit generator” in his firm. Meanwhile, Cheong was an intellectual property lawyer working with an international law firm.

The duo shared a keen interest in tech alongside their day jobs. Choong was passionate about “innovative and disruptive businesses,” while Cheong had advised many startups, such as homegrown social network SAYS and taxi app MyTeksi, during his career.

The latter is also close friends with Khailee Ng of 500 Startups fame, and iMoney CEO Lee Ching Wei, among others in Malaysia’s startup community. Ching coincidentally went to the same high school as Cheong.

The idea for Kaodim emerged when Choong and Cheong realized that most Malaysians were finding service professionals through referrals from friends and making phone calls – a process which is extremely time-consuming.

Having observed the success of US-based Thumbtack – which recently raisedUS$100 million – the duo decided that Malaysians should be able to hire services with the same ease as “finding a cab instantly with taxi or car booking apps.”

Kaodim matches users who are looking for services – such as plumbing or electrical wiring – with the relevant service providers who are both interested and qualified in providing it. The user can put up a request for whatever they need, and service providers will respond directly to him/her with personalized quotations and other information about themselves. The quality of service providers can be determined through the reviews that they receive. 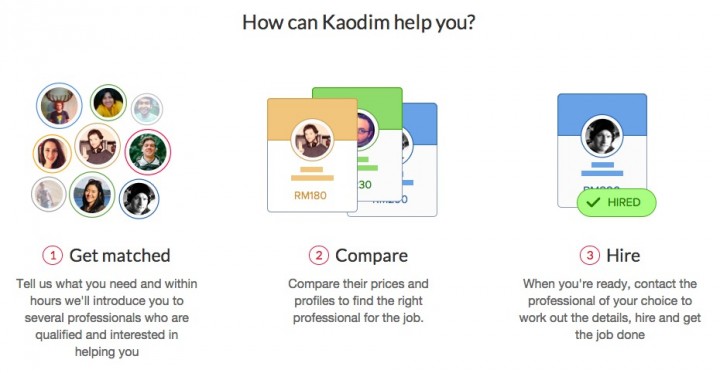 In this way, the customer is “empowered with information such as the estimated price to complete the specific job requested, their availability, experience, and other relevant information,” according to Choong. The platform is free-of-charge for users.

“Kaodim saves people from spending precious time and effort hunting down the right service provider who can get the job done at the right time and price. At the same time, providers no longer have to wonder where or when their next appointment is going to be. We bring them together,” Choong adds.

While service providers do not have to pay a booking fee at the moment, Cheong reveals that one of the monetization models they are looking into is charging each service provider a small sum in the range of MYR 3 to MYR 20 (US$1 to US$6) each time they submit a quotation, or introduce themselves to a user.

Providers typically pay a static monthly fee – which can be fairly expensive – to have their services listed on other directories or online advertisements, which Cheong claims doesn’t necessarily translate into customers.

Given that the average renovation project costs about MYR 60,000 (US$17,500), he thinks the nominal fee they might charge on Kaodim is practically a steal in comparison. “We consider this to be an intelligent marketing and advertising expense for service providers,” Cheong says. “They’re paying such a small sum to issue a quotation, and given an opportunity to make a lasting impression on a customer who is genuinely looking for their service.”

Not surprisingly, when surveyed by the founders, most service providers were quite receptive to this monetization model. Cheong explains why:

They’ve been getting real leads, actual meetings with new customers, and also completing new jobs. Contractors used to have to travel for hours to meet a client just to give a quotation which may not translate into a hire. Now they can just quote through their notebooks or mobile phones.

Not only that, but the duo have also been striving to educate providers on how to prepare impressive-looking and useful quotations for their customers. “They may be great at tiling, but sometimes they’re not as great at presenting information, marketing, or giving estimate prices without seeing the site,” says Cheong.

Accordingly, the quality of the service providers’ quotations and communication with customers have improved drastically since, which means good business for all parties involved. “There have even been some of them who have offered to pay a portion of the job over to us!” adds Choong.

Currently, the marketplace for services in Malaysia is still very much dominated by static directories, listings, and online advertisements, giving Kaodim the first-mover advantage. They do anticipate other similar models entering the scene in the coming year, though.

In just a month since its official launch, Kaodim already has around 500 vendors onboard, with 400 job requests being made and, correspondingly, 1,300 quotations returned, many of which the duo claim have translated into jobs and new clients for these service providers. These have been achieved with minimal spending on advertising.

Feedback from users has been very positive as well. “Since the launch of our site, users receive three to five responses from interested services providers within minutes or hours. They love how fast the responses come in,” claims Cheong. So far, most requests have been for contractors, handymen, and cleaners, and they are looking to expand into other types of services such as tuition teachers and music teachers as well in the near future.

The founders are currently looking at raising funds to accelerate Kaodim’s growth – what they’ll be focusing on in the coming year, given that they’ve found product-market fit. Barely into their first month, they’ve already met with a number of investors, and are now weighing their options.

If they do secure a round of funding, it will likely be channeled towards three things: translating the site into Malay; introducing a number of features which would speed up the process on both the user and vendor’s end; and expanding the service to the rest of Southeast Asia.

While both founders admit that they don’t have much of a background in digital marketing, software development, or entrepreneurship, they are confident that this won’t be a problem in building and scaling their business. Says Cheong:

Much of our experience and skills as lawyers have contributed well to our judgment in building this business. At the same time, we realise that there are exigencies in this space which we are not too familiar with, but we’ve been surprised by how fast we’ve been able to learn and pick things up. We’ve also benefited tremendously from our strong network of friends in the startup community, such as Khailee and Ching Wei. They’ve advised us in everything from search engine optimisation, growth hacking to coding and continue to support us on this journey. It’s given us a lot of assurance and confidence.

Original article written by Daniel Tay can be found in Tech In Asia, https://bit.ly/2JJibIh